August 26, 1999 witnessed the birth of France’s premier bank, a new European leader in financial services. The creation of the BNP Paribas Group, led by Michel Pébereau, then Chairman and CEO of BNP, was at that time the largest bank merger ever implemented in France.

From 77,000 employees at the time of the merger, the Group has progressively increased its workforce to 205,000, partly thanks to the acquisition in 2006 of BNL bc, the sixth largest Italian bank, and, more recently, in May 2009, of 75% of Fortis Bank in Belgium and 66% of BGL in Luxembourg.

Today, BNP Paribas has more than 13 million customers in its four domestic markets, which are Belgium, France, Italy and Luxembourg, as well as 5 million more customers in the Group’s other retail markets: the Mediterranean basin, Eastern Europe and the USA.
In 1999, the Group had 2,500 branches. Since then, the number has increased to 7,000 throughout the world.

As the number one bank in the euro zone in terms of deposits, BNP Paribas has demonstrated the effectiveness of its diversified customer-driven business model. From the outset, this model has been firmly grounded in the Group’s strength as a retail bank as well as in the quality of its investment banking and asset management operations.

“More than ever before, our goal is to consolidate on the leading position forged by BNP Paribas, the bank for a changing world, in what is a rapidly evolving European and world banking industry” Michel Pébereau and Baudouin Prot, respectively Chairman and CEO of BNP Paribas. (2008 Annual Report) 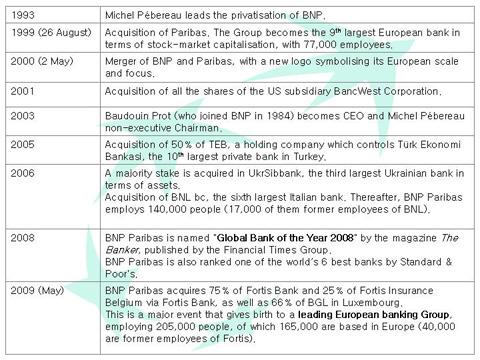 The bank for a changing world